There’s never a boring moment in the land of collaboration. If not collaborating on a project, one can always plot another opportunity. Now, that’s not too bad for engagement and satisfaction levels when it comes to competitive work. And, then there’s the bit about learning new things. For instance, what is the dollar value to the economy that comes from collaboration? Or, did you ever hear about ‘Collaboration Day’, or brilliant collaboration enhancing systems such as ‘teamability’, developed by behavioural scientist Dr Janice Presser and her colleagues in the USA. Forget Star Wars; collaboration is more edgy and offers a richer narrative that could make even Yoda green with envy. Having said that, I shall obey the sage’s advice – “Always pass on what you have learned.”

Flash back to 1984. That’s when two behavioral scientists — Janice Presser and Jack Gerber — first sought a way to measure team dynamics. Fast-forward a quarter century of research and development later, and you get Teamability (a product created by The Gabriel Institute). Teamability is a technology of teaming. It measures how people perform in teams to improve quality and productivity, while also reducing turnover in the workplace…READ ON

How Collaboration Intelligence Can Tell You Who’s Going To Quit

Collaboration intelligence is the simple idea that we can learn much about our organizations by watching the way we work together. By looking at who is talking to whom, where calls and emails are going and coming from, and numerous other metrics, the real organizational chart emerges. By looking at the trends in such metrics we can figure out who is becoming a star and who is checking out. All of this gives us ideas and ways to optimize we never had before…READ ON

Collaboration: a distracting buzzword, or vital for business growth?

Collaboration is one of the buzzwords of the early 21st century. It has become a hot topic among early-stage companies, governments, artists, charities, startups and corporate behemoths. Many see collaboration as a super-pill that can cure organisations’ ills, regardless of the diagnosis. But is it truly as effective as we are led to believe? Small businesses and early-stage companies should be especially cautious. There is no denying that collaboration is fun, and often intellectually exhilarating; it can also be helpful in generating new ideas and developing projects…READ ON

Not just a buzzword: Collaboration is worth $46bn to the economy

Collaboration was hot topic in Cannes and it’s one of the buzzwords currently making the most buzz. But it actually contributes to business performance and the economy, according to a report by Google and Deloitte. It’s worth $46 billion to the economy each year, they claim. That’s 3% of the Australian economy – roughly the same value as the entire creative industries which were calculated to contribute $45 billion to GDP in the Government’s Creative Industries Innovation Centre report in February. Within that, advertising and marketing were valued at $7.2 billion…READ ON

While several months back, May’s funder convening in Aspen showed that more grantmakers recognize that no single organization can go it alone when it comes to addressing social issues that are complex, dynamic and intersecting. With efforts like collective impact initiatives that are seeking to transform whole systems, grantmakers can play an essential role in encouraging and supporting nonprofits to work together to achieve better results. To borrow a term that came up many times during the forum, grantmakers are essential partners when it comes to building a community’s “civic muscle.”..READ ON

Problems in the United States aren’t getting any smaller, and it’s becoming harder to advance solutions—but that’s not because there aren’t good ideas with demonstrated impact. As the recent SSIR article, “Philanthropy in a Time of Polarization,” pointed out, increasingly all sectors—public, private, and nonprofit—are suffering from the effects of polarization in how we view the world, talk about ideas, and identify solutions. So it’s worth taking a moment to celebrate and learn from one of those rare moments when the US political system works the way it’s supposed to: Congress, aided by input and collaboration from the private and nonprofit sectors, negotiates and reaches a compromise that benefits millions of Americans…READ ON

Collaboration Day will be celebrated in the Observer area

A DAY of collaboration will show how working together is better than competing. Three local organisations who offer competitive services will come together tomorrow (Thursday, July 17) to show how collaborating can be better for business rather than being in competition. In celebration of International Collaboration Day, the Core Business Hub in Bognor Regis, OfficeFlex in Chichester and Selsey Works are offering free co-working space, where business people can hot desk, use the WiFi and connect with other local businesses while they work…READ ON

Buddhist Economics: How to Stop Prioritizing Goods Over People and Consumption Over Creative Activity 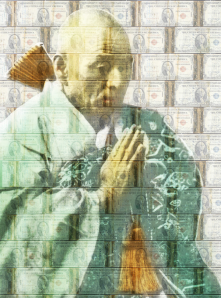 Much has been said about the difference between money and wealth and how we, as individuals, can make more of the latter, but the divergence between the two is arguably even more important the larger scale of nations and the global economy. What does it really mean to create wealth for people – for humanity – as opposed to money for governments and corporations?…READ ON