Imagining the future is a notoriously difficult task. In fact, leading scientists say we can’t imagine the future; we can only project some juxtaposed images and sensations from the past. Regardless, our nature is to try. And so it is when we think about the way we will be able to contribute to society, and in the process get some reward. Careers were a fascinating way of doing that. But now we know, at least instinctively, that new competencies are needed for that bright future. If you’re reading this, you would not be surprised to hear that collaboration is fast emerging as one of the most critical competencies that the future employer (well not a future as in years from now, but more like next week) will look for. Employers have already made this clear on numerous occasions. Some of this insight is also shared in this week’s selection. Hope this all helps in making a commitment to be better collaborator. 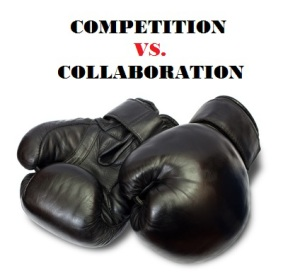 As you might imagine, there is never a shortage of grunting and groaning – especially amongst the more competitive members of the group. And, as you might also imagine, they are NEVER the ones who get the highest score in the activity. The pairs with better team performance are the ones that work together. Our instinct is often to compete with or fight against or compare ourselves to someone else – but truly effective teammates and leaders recognize that the only competition is with our previous selves. Our interactions with other people should allow for win-win outcomes. Do you normally find yourself working to “beat” the other people on your team, or do you seek to work together for the benefit of both?…READ ON

Collaboration is a major competency that asks people who work together to attend not only to personal interests but also to outcomes benefitting the whole organisation. It is a great way to address complex challenges since it has the potential to tap communal creativity and unleash true innovation of employees. The culture of an organisation depicts how an organisation conducts its business. It defines the behavioural style as to how an organisation deals with its various stakeholders, internal as well as external. This makes culture a very important aspect for organisational success. Companies strive endlessly to imbibe an appropriate culture for optimum organisational effectiveness…READ ON

Making Collaboration Real: Inside Plantronic’s Work Culture (And What We Can All Learn)

Are you interested in learning how a technology company on the other side of the hill from Silicon Valley achieved a turnover rate of less than 6%? I want to introduce you to Plantronics and an innovative program called Smarter Working. They have turned true collaboration at work into a reality – with results to back up their claims. Plantronics has been in the technology game for over 50 years. Innovation is not only at the core of its technology, but a core value that dictates how the business is run. Smarter Working — a program that leverages workspace design, new ways of working and collaborative innovation to drive team productivity — is a product of that innovation…READ ON

In the new study at the University of Tennessee, researchers developed a mathematical model that offers answers to how humans evolved high intelligence, required for complex collaborative activities, despite the various costs of having a big brain and how did humans evolve strong innate preferences for cooperative behavior, as cooperative behavior is vulnerable to exploitation by cheaters and “free-riders.”…READ ON

Why don’t more Europeans want to be entrepreneurs?

A majority of Europeans (58%) would prefer to work as an employee rather than risk starting their own business. This contrasts starkly with attitudes in the United States, where a majority (51%) say they would prefer to strike out alone.

Majority of Europeans (58%) would prefer to work as an employee rather than risk starting their own business. This contrasts starkly with attitudes in the United States, where a majority (51%) say they would prefer to strike out alone. Why are so few Europeans setting up their own businesses? Despite red tape and an innate European fear of failure often taking the blame, the Eurobarometer Survey on Entrepreneurship suggests that it is rather the difficulty of raising start-up capital and the poor economic environment preventing more of Europe’s would-be entrepreneurs from taking the plunge…READ ON

A Blueprint for India-Australia Collaboration 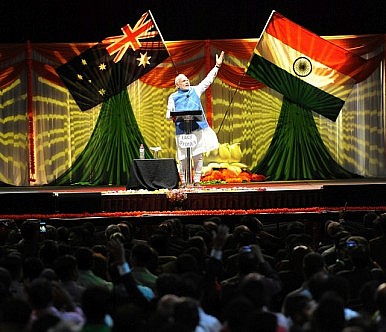 Given the great potential in the Indo-Australian bilateral relationship, the long gap between visits is hard to fathom. India and Australia today both have significant roles to play in maintaining peace and stability in the Asia-Pacific, even if as part of the U.S. “pivot.” Australia is also part of Modi’s “Act East” policy push and this visit follows close on the heels of his recent engagements with the likes of Japan and Myanmar. But his outreach to Australia is about much more than just geopolitics…READ ON

It’s Never Too Late! This Infographic Shows That Success Comes At All Ages

Feeling like a failure? Wondering if you should give up on your dreams and sell out for the safe job with the retirement plan? Stop it! No matter what your age, it’s never too late to do something amazing- in business or in life. In this infographic, Mark Vital and Anna Vital organized data to show the wide spectrum of ages when successful CEOs started their huge businesses. While there are the early birds like Mark Zuckerberg(19), Bill Gates (20), and Steve Jobs(21), the average age is 35.39 years old. But that doesn’t mean there aren’t still lots of success stories after that age. Chip Wilson started Lululemon at age 42, Joseph Campbell of Campbell’s Soup was 52 when he took the leap, and Charles Flint started IBM when he was 61! Allow this infographic to inspire you to chase after whatever it is you’ve been dreaming of doing…READ ON